Information and mis-information is abundant. It's propelling civilization ahead at a remarkable pace. What will the next 10 years bring?

The reference of course is the internet.

With a mild curiosity and some basic search skills, one can find more information in a few minutes than can be read and digested in a few days.

Example: Generating Electricity from the Wind

Here's a 9:20 video on how to make your own wind turbine.

There are several other sites worth perusing for decent information as well:

A guy who makes them in Arizona

Here's an interesting video on how a guy made one with plastic barrels: Jeff Berezin

A guy who makes them in Augusta, KS

There is an interesting article in this month's edition of Inc. magazine (November 2009) on page 25 titled "How to Fix Health Care". It is formatted as a Q&A with the answers provided by John Baackes, who is CEO of Senior Whole Health. "The Cambridge, Massachusetts, company coordinates health care for patients who receive both Medicare and Medicaid, a business that has given Baackes an up-front look at the flaws of the current system."

The article can be found here: Inc. article. One observation in particular is very interesting. The author points out that employers started providing health insurance because they weren't allowed to raise wages to attract workers during the second world war. And the IRS determined that companies could consider that a business expense. Now people know less about health insurance than homeowner's or auto insurance. And in general they know little of the true cost of health care.

Mr. Baackes goes on to suggest that the government incentives to employers for providing health insurance should be discontinued. And insurance ownership should be mandatory. Then when everyone becomes an active consumer, the insurance companies would shift from offering group plans to plans based on the needs of individuals.

Posted by Randy at 3:22 PM
Categories:

Researching the stock market and individual stocks can be like a paying job. With the power of compounding, small improvements in investment returns amount to big differences over time. Comparing 25 year-long investments for example, show that if you started with $10,000 you would have earned over $14,000 more at 8% than at 7%.

With the recent increases in gold and silver, one might wonder if precious metals are good long-term investments. Wikipedia has a chart (shown below, copyright held by www.sharelynx.com, but authorized for copy) that illustrates how the price of gold has fared versus the Dow Jones Industrial Average, a proxy for the stock market.

On examination, two observations are significant. 1) Just like in the plot of the S&P 500, shown in a previous post, the stock market's moves follow a trend over time and, 2) On average, the stock market increases 2% per year more than the value of gold.

Arguably the most significant is what isn't shown. This chart ends March 2007. Taking the value of the Dow today (9972) and dividing by the price of gold today (about $1055) yields a point at October 2009 and 9.5 - which is below the shaded 75% confidence band. In other words, stocks are low or gold is high by historical standards. 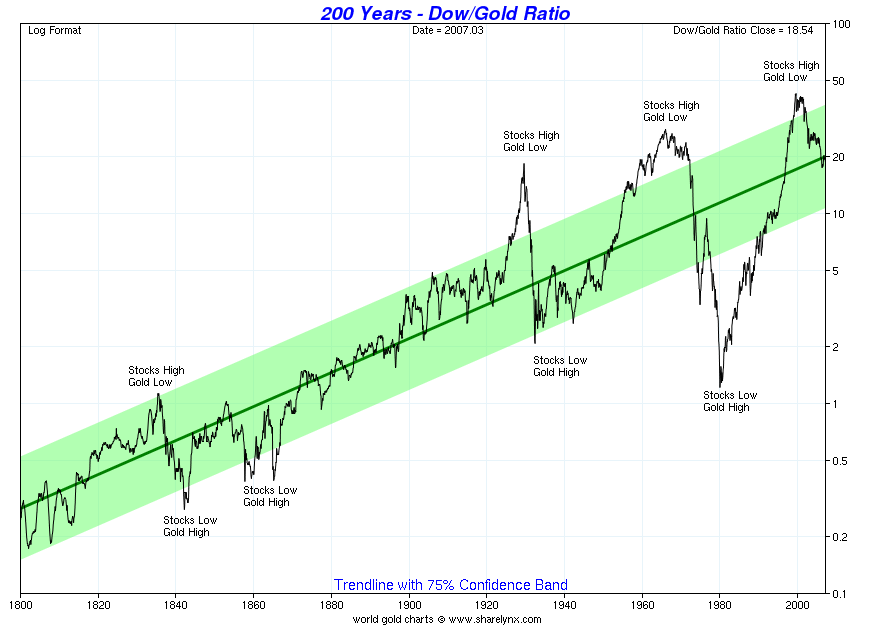 Posted by Randy at 2:22 PM
Categories:

For most of my career, I've only dabbled in computing. I took a programming course in college and really enjoyed it, but was humbled by those who were gifted, and there were more than a few. It seemed it would be an uphill battle to advance in the field.
We used computers in the oil refineries for process control. They were specialized for the purpose and were very expensive.
But now technology has advanced to the point that the process control can be done with more generic equipment and the programming languages, such as Java, have advanced to the point that even I might be able to program a control system.
So I'm getting deeper into programming than I ever have before for a current business project. And for hobby, I'm providing web site support.
The subject of the terms "geek", "nerd", and "dork" came up this morning in reference to a programmer's challenge. Those terms don't seem to fit the ideal of the computer scientist / programmer because there is often very serious, high level, creative thought in designing an algorithm and applying the computer language to a solution.
In my mind, a geek is one who is able to get the computer to work by doing the tricks that aren't necessarily in the procedure manual. A simple case is restarting the operating system when it starts doing things it wasn't designed to do. A geek is the guy who is able to make the system work through unconventional methods.
I like the geek work, too. There is often a challenge that must be solved and I get personal satisfaction from solving problems.
While researching other's opinions of the differences in the above terms, I came across a fun little test. Here's a link:

Posted by Randy at 9:21 AM
Categories:

Last night I attended a lecture by Dr. J.R. Fears from his series "Lessons in Leadership Through the Great Books". It was held at Northern Oklahoma College here in Enid in Montgomery Hall at the Gantz Center. It was the second of five lectures in the series and was entitled "Shakespeare's 'Julius Caesar'". The series is sponsored by the Cherokee Strip Regional Heriage Center. I estimate there were about 1000 people in the audience. Their site is Cherokee Strip.

I went not knowing what to expect. It started right at 7:00, as advertised, and there weren't many seats left. Within a few minutes there were teen-aged looking people sitting on the floor because there were no more seats. The audience was comprised of people aged from their teens to senior citizens. I would guess the median age was about 55 years old. After a brief introduction Dr. Fears gave his lecture and after about 45 minutes he opened for questions and we were out by 8:00.

And it was actually a very good lecture.

Dr. Fears is very knowledgable on the subject, is a great story-teller, is very animated, and engages the audience. But what was really interesting was how he applied the lessons of "Julius Caesar" to one of our greatest leaders - George Washington. And how other leaders, such as Napolean and Hitler, did not learn from "Julius Caesar" and they and their people suffered the consequences.

His message included such assertions as: Our great country has its roots in high moral integrity and that's why we've been successful. Though we've had our share of "Julius Caesar" - like leaders, we have a constitution that allows us to rectify the situation. But we must participate in the process to keep the country strong.

I really liked it. I think I'll go to the next one. I wish I could've heard his first of the series when he discussed Theodore Rooseveldt.

Posted by Randy at 2:47 PM
Categories:

As an investor, I carefully watch the market and look for data and information of value in valuing stocks. I've concluded, as many others have, that the stock market and individual stock prices move in unpredictable ways in the short term. But over time, there seems to be some basis for the pricing.

For example I collected the daily prices for the S&P 500 index from Yahoo! They have data going back to 1950! Plotting the prices on a logarithmic scale versus time on a standard scale I see a trend. In fact, the data correlates to a straight line with 0.94 fit factor! The slope is 7.8% increase per year. Note that inflation over the same time period is 2.7% (thanks to usinflationcalculator.com) but does not fit a trend line that I can see. So inflation adjusted return over that time period is 5.1%.

Comparing the S&P data versus the trend line yields some interesting observations. 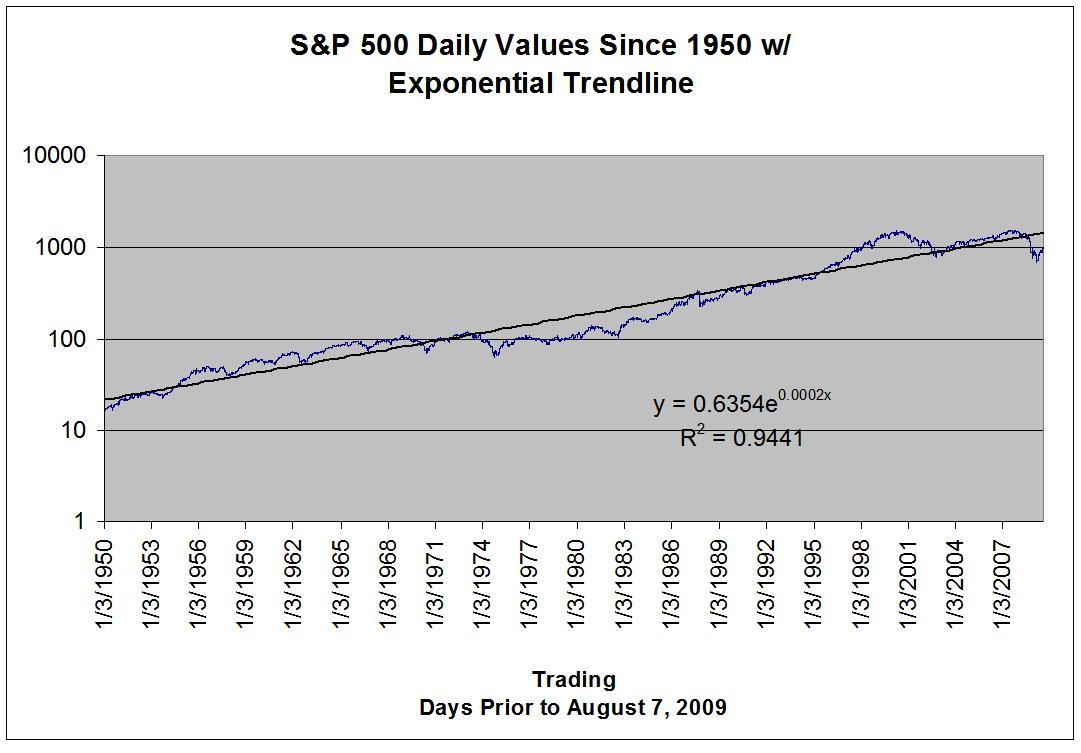 Posted by Randy at 9:08 AM
Categories:

We're still feeling the effects of the recession. Consulting work is harder to find than a year ago. That gives me a little more discretionary time to invest in myself.

For example, Stanford University has an excellent introductory course on programming. They use Java and it's a lot of work but it's well worth it if you want to learn programming. They provide all the lectures and handouts and even some starter code. I am fortunate that my brother knows programming because several times he was able to help when I had questions. See: Stanford.

Hello and welcome to the first entry of the first blogging site I've set up. This is really just a test to get the "bugs" worked out.